Judge and Jury Megaways is a crime-themed slot that will take you in front of the Judge as you try to grab hefty wins. Begin a crime-solving odyssey and catch bad guys to score wins and receive handsome payouts. Use several features to get your hands on the loot as you enjoy perfect cartoonish visuals. The entire audio-visual aspect is fantastic, with the graphics accompanied by an uplifting, jazzy soundtrack. Playing Judge and Jury Megaways is an entirely positive and thoroughly entertaining experience.

Read our review for the ultimate guide on how to play Judge and Jury Megaways Slot by Pragmatic Play. 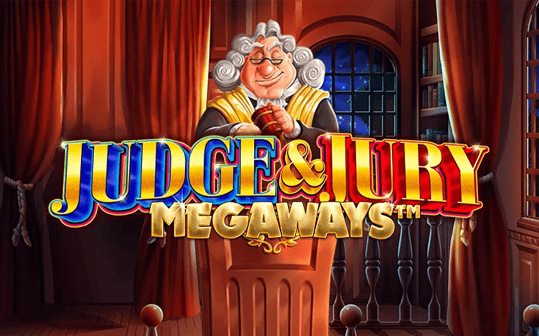 The action plays out on a classic six-reel Megaways board with two to seven rows and up to 117,649 ways to win. A courtroom and the Judge's office are the places of action, with playful, cartoonish visuals to complete the visual impression. A phenomenal jazzy tune completes the audio-visual aspect. The fun never stops once the reels start spinning, for the feature-rich release provides a wildly entertaining adventure. It offers an excellent blend of expected elements and pleasant surprises to deliver a memorable and engaging game.

A plethora of features permeate the game, starting with the Judge, who enables two random Bonuses. Wanted Posters, I.D. Parade and Free Games constitute the rest of the features. Numerous winning opportunities await around the corner if you are lucky and patient.

The titular Judge will occasionally award two random features during the base game. Namely, the first will remove low-pay symbols on a non-winning spin, making only premiums active in the following cascade. The second will randomly place three to six Wilds on the reels.

A Wanted Poster with a character on it appears before every spin on the right side of the screen. If the same symbol hits the reels, you will be paid an instant prize of 2x, 5x, 10x, 100x or 5,000x the stake. When it happens, the poster is removed, with a cascade falling from above. Wanted Posters turn up in the base and Bonus game but are not accompanied by a progressive Multiplier.

Four Scatter symbols anywhere in view trigger the Free Spins round, granting 10 free spins, plus 5 for every extra Scatter. Each win throughout the round enhances the progressive Multiplier by +1 before the new cascade lands. If three or four new Scatters appear during the game, you will receive five or ten additional spins.

Landing three or more Cell symbols during the Free Spins round will activate the I.D. Parade feature. Hitting three to six icons grants one to four picks. Four suspects are shown on the screen for the round to pick them and unveil prizes. They can be 3, 5 or 10 additional spins, Multiplier values or six instant cash prizes of 5x-100x the stake.

What is the RTP of Judge and Jury Megaways Slot?

The RTP of Judge and Jury Megaways Slot is 96.50%, slightly surpassing the industry average and indicating decent wins.

Is Judge and Jury Megaways Slot a highly volatile game?

Yes, Judge and Jury Megaways Slot is a highly volatile game, meaning that it promises thrilling moments and sequences, with seldom, but substantial wins for the players.

What is the maximum win of Judge and Jury Megaways Slot?

The maximum win of Judge and Jury Megaways Slot is 10,000x the stake.

Does Judge and Jury Megaways Slot have Free Spins?

Does Judge and Jury Megaways have bonus features?