We do not often see Arabian mythology as inspiration for slot games. However, that only helps to make it stand out even more. 10,001 Nights Megaways brings to life one of the best-known stories from that region. Abundant wealth shines on through the backdrop, inviting us to lean back and listen in on Middle Eastern folk tales. In our review, we look at the game to see if its gameplay matches the beautiful stories.

Read our review for the ultimate guide on how to play 10,001 Nights Megaways Slot by Red Tiger Gaming. 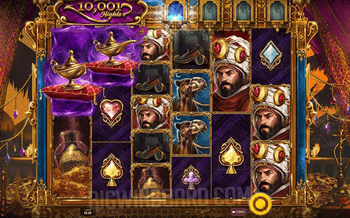 With six reels and a Megaways setup, this game provides a much more different gameplay loop than standard slots. This release also goes all-in to immerse players in its setting. The unique theme makes 10,001 Nights Megaways more interesting than yet another game set in ancient Egypt or some fantasy realm. The gorgeous visuals Red Tiger offers through detailed backdrops and smooth animations add to its appeal.

Exciting bonuses are essential for any modern slot to succeed. Fortunately, this game has three thrilling bonuses that players can take advantage of. One of those extra features has several bonuses you can activate through it.

Each win triggers a cascade. Winning symbols disappear from the playing field, and existing icons fall to take their place. Brand new symbols appear at the top of the board, allowing multiple consecutive wins.

This release ties in Aladdin’s Lamp as part of the Collection Metre bonus. Players collect magic lamps as they appear on the playing field. Collecting enough lamps activates the corresponding feature. Collection Metre progress is locked to your bet level. Changing it means you start the metre from scratch.

Mega Wilds can create up to four full reel Wilds on the grid. Each full reel Wild has a multiplier, ranging from 2x to 7x. It requires thirty collected magic lamps to become available.

What is the volatility of 10,001 Nights Megaways Slot?

What is the maximum win of 10,001 Nights Megaways Slot?

Does 10,001 Nights Megaways have Free Spins?

Yes! Players have to land three Scatter Symbols to activate the Free Spins bonus. During this feature, players benefit from a progressive win multiplier that goes up to 20x.

Yes! 10,001 Nights Megaways Slot has both Wilds and Scatters. Wilds can substitute for most symbols except for special icons. Scatters are used to activate the free spins round.