Space Wars 2 Powerpoints is another welcome addition to the space-related games in the industry. The original game was popular, and the sequel was in the making for several years, but it has finally arrived. The playful, cartoonish galactic adventure has outdone the predecessor in many ways, providing you with a fantastic playing experience. Multiple attractive features contribute to fast-paced gameplay; the fun never stops with Cluster Pays. It can bring you hefty wins, and a few pleasant surprises along the way make up an adventure you will not forget soon. Space Wars 2 Powerpoints will delight slot enthusiasts worldwide. Check out our complete review to embark on a space journey and snatch lucrative payouts. 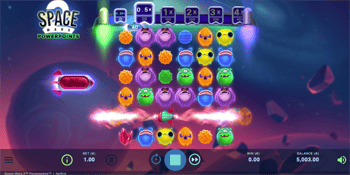 The action occurs on a six-reel game grid with six rows, employing Cluster Pays to deliver substantial wins. The graphics are sharp and crisp, with a humorous, playful touch, maintaining the original game’s spirit. Additionally, the memorable audio-visual presentation is combined with straightforward, swift gameplay that keeps the game thoroughly entertaining. Once the game begins, it never stops being exciting due to fantastic features and modifiers that create exciting situations. Slot enthusiasts are in for a treat, and the fans of the original game will indubitably enjoy themselves.

Numerous features open many possibilities and winning chances, including Powerpoints, Blasters, Zappers, Bombs, and Free Spins. Wilds with Multipliers should not be forgotten, too. When wins are formed, they create Powerpoints that are added to the meter, giving you higher levels and enhancing the win Multiplier. 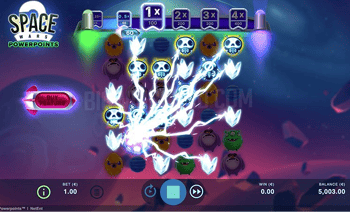 Landing a 4-symbol horizontal or vertical win grants a Column/Row Blaster symbol, removing all icons but Wilds and feature symbols. It also adds Powerpoints to the meter. Numerous winning opportunities await you if you are patient and fortunate.

A win with five or six symbols produces a Zapper that removes one to four types of symbols for a five-symbol win. If six icons form the winning line, a Zapper removes three to four types. During the Free Spins round, you can receive a Zapper when you obtain a 5-8 symbol match.

A Bomb is added to the board when a win is formed by combining horizontal and vertical symbols. It explodes and disappears, removing every symbol around itself and adding points to the meter. If a Bomb removes a Multiplier Wild, it enhances the number of Powerpoints.

A 3-symbol win in the base game and the Bonus round puts a Wild symbol in one of the empty positions. During the Free Spins round, the Wilds come with a Multiplier of 2x, 3x, 4x, 5x, 10x, and 25x. If Multiplier Wilds participate in a win, they increase the number of awarded Powerpoints.

If feature symbols are next to each other, they produce combos and enhance their power.

Acquiring at least 1,000 Powerpoints triggers the Free Spins round. The number of spins depends on the number of points accrued. Throughout the round, the grid expands to 8 rows, with the possibility of receiving extra free spins.

What is the RTP of Space Wars 2 Powerpoints Slot?

What is the volatility of Space Wars 2 Powerpoints Slot?

Space Wars 2 Powerpoints is a highly volatile slot, creating thrilling moments with the Cluster Pays mechanic and many fascinating features.

What is the maximum win of Space Wars 2 Powerpoints Slot?

The maximum win of Space Wars 2 Powerpoints is 10,020x the bet, which can amount to more than £1m on the highest wager.

Yes! You need to gain at least 1,000 Powerpoints to activate Free Spins.

Wilds come after a 3-symbol win and may have a Multiplier attached in the Free Spins round. The game does not have any Scatters. You can play the game for free or real money at Playfrank UK Casino.