Prepare to set sail and take command of a fleet. Play'N GO challenges players to take down Baron Fusco, the terror of the skies. Along the way, you will combine forces with other captains and their ships to achieve supremacy at sea. We do not often see war-themed slot games, especially one that focuses on sea and air battles. However, Cash of Command picks that as its theme and bases its visuals and extra features around it. 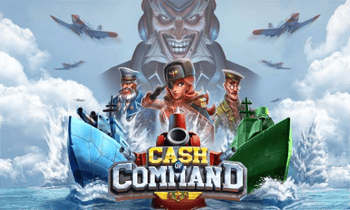 Play Cash of Command Slot for Free or Real Money

Cash of Command comes with nine reels, nine rows, and cluster pays instead of paylines. The animations look great; we especially enjoy the character cut-ins that appear when the bonus activates. The way the backdrop and playing field seamlessly blend also adds to the visual appeal of this Play’N GO release.

The developer adds to the immersion by tying bonuses into the theme. That does not hamper the features either; they are plentiful and deliver exciting action that shakes up how we play Cash of Command.

Cascading reels and cluster pays go together like fish and chips. Each win activates a cascade, where winning symbols disappear from the playing field. Existing icons fall to take their place. Meanwhile, new symbols appear from the top and fall to fill in any empty spots. That allows multiple consecutive wins at the cost of a single round.

Every non-winning spin can randomly activate the Baron’s Turrets bonus. The turrets fire on the playing field, removing icons and adding Wilds. Wilds substitute for all symbols with no limitations.

The game has a meter on the left side of the screen. All wins in a single spin will charge the meter. Collect enough winning icons, and you activate one of three heroes. The order in which you unlock new heroes changes every spin. The meter also resets between paid spins.

Fully charging the meter activates the Baron Fusco bonus. It plays after all the Naval Heroes bonuses play out. The baron will fly across the reels, destroying two of the three deployed ships. The remaining boat transforms into a super ship, offering an enhanced bonus compared to what we usually get.

Play for Free or Real Money

You can play Cash of Command Slot for free or real money at Payfrank UK Slots Lobby.

What is the RTP of Cash of Command Slot?

What is the volatility of Cash of Command Slot?

Cash of Command is a high volatility slot.

What is the maximum win of Cash of Command Slot?

The maximum win of Cash of Command Slot is 5,336x the total wager.

Does Cash of Command Slot have free spins?

No, Cash of Command Slot does not have free spins since the game does not use traditional spins because it is built on cascading reels.

Does Cash of Command Slot have bonus rounds?

Yes, Cash of Command Slot has bonus rounds. Players need to collect enough winning symbols to unlock one, two, or all three Naval Heroes. Each hero has a bonus which affects the playing field in some way. Fully complete the metre to activate the Baron Fusco bonus, which gives us a super-charged version of one Naval Heroes feature.

Does Cash of Command Slot have Wilds / Scatters?

Yes and No! Cash of Command Slot has Wilds but does not have any Scatter symbols. Wild icons can substitute for all symbols.