The promise of mining up an obscene amount of gold drove many ambitious souls to pick up their lives and move. These gold rushes are well-documented in history, though none more than the ones happening while the American West was young. Pragmatic Play pairs us with a profit-driven prospector in their latest game titled Bomb Bonanza. Is this release truly hiding gold in its mine? Read on to find out. 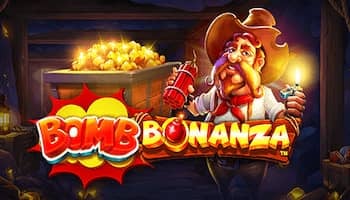 Pragmatic Play opted for a five-reel, five-row playing field for this game. The increased size allows for more paylines, which translates into more chances to score a win. You also get treated to an upbeat Wild West soundtrack, fun graphics, and stellar animations. We especially appreciate all the effort in designing this game’s attractive background image.

If you want fun and simple extra features, we highly recommend Bomb Bonanza. It has two bonuses, both of which will ramp up the excitement when they occur.

Whenever a Wild lands on the playing field, all Wilds have a chance of increasing in size. Wilds expand in a random direction, covering a 1x1, 2x2, 3x3, 4x4, or 5x5 square. Any icons on the board where Wilds expand also transform into Wilds.

Collect three Scatters to win the free spins bonus. Scatters can only appear on reels one, three, and five. The round start with 6 free spins and the possibility of gold nuggets appearing on the reels.

Golden nuggets can land in any position on the playing field. Each nugget gets added to a metre used for the progressive feature. After that, the nugget explodes, with the remaining symbols falling to the bottom of the screen. Any empty places get filled with new icons coming from above.

The progressive feature starts at level one. There is five levels total, and we advance through them by collecting enough golden nuggets.

Play for Free or Real Money

You can play Bomb Bonanza Slot for free or real money at Payfrank UK Slots Lobby.

What is the RTP of Bomb Bonanza Slot?

What is the volatility of Bomb Bonanza Slot?

What is the maximum win of Bomb Bonanza Slot?

The maximum win of Bomb Bonanza Slot is 2,015x the total stake.

The only other bonus round Bomb Bonanza has are expanding Wilds. Wilds can grow to cover a square ranging from 1x1 to 5x5. The game determines when the Wilds expand and how much they grow randomly.

Yes, Bomb Bonanza Slot has both Wilds and Scatters. Wilds can substitute for all symbols except for Scatters and can appear on all reels. Scatters activate Free Spins and can only land on the first, third, and fifth reel.