Do you have what it takes to become the King or Queen of the Jungle? Swing your way through these Amazon slots and discover the best jungle-themed casino games on PlayFrank Online Casino, each with their own bonuses, free spins and lots more!

Read our review for the ultimate guide on how to play Amazon Slot Games.

The features of these slots are superb, and so are the wins - so we’re positive you’ll enjoy taking these Amazon Slots for a spin!

Gonzo’s Quest is a legendary video slot machine game created by NetEnt. Gonzo’s Quest follows the adventures of bold explorer Gonzo as he searches for the mythical city named El Dorado (which translates to “the Golden One” in English). After landing his ship near Peru, Gonzo fades away into the jungle, searching for the Incan treasure. 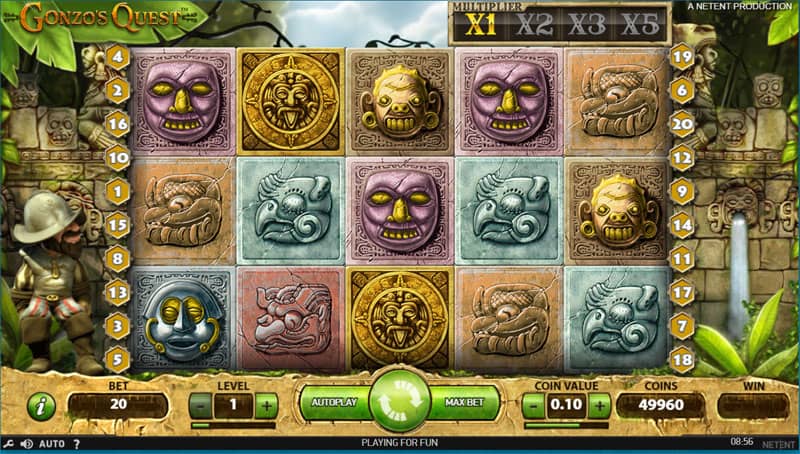 Powered by NetEnt, Gonzo’s Quest is set on a 3-row, 5-reel, 20-payline grid. The dazzling graphics, sleek design and thrilling features have sealed Gonzo’s Quest faith as one of the world’s all-time favourite slots!

Check out the demo or play for real money, with bets ranging from as little as £0.20 all the way up to £50.

The main feature of Gonzo’s Quest is the Avalanche Feature, which is the same as the “tumbling reels” feature found in other slots.

The Avalanche Feature comes into play every time you form a winning combination across the reels. You’ll get your pay out from the winning icons before they split apart, making space for new tiles to replace them. The feature will repeat for as long as players form winning combinations from the new layout of tiles.

To spice it up, NetEnt added a multiplier, which is visible at the top right corner of the screen. This multiplier will rise with each recurring winning line, giving the potential range of 1x to 5x multipliers on every win.

Gonzo’s Quest’s biggest wins come from the Free Falls Feature. This feature is triggered when three “Free Fall” symbols land on three consecutive reels. This awards players 10 Free Falls (or Free Spins) while also changing the values on the multiplier meter. With each win spin, the multiplier value rises, with the potential of dishing out 3x - 15x multipliers!

You can play Gonzo’s Quest for free or real money at PlayFrank Casino. 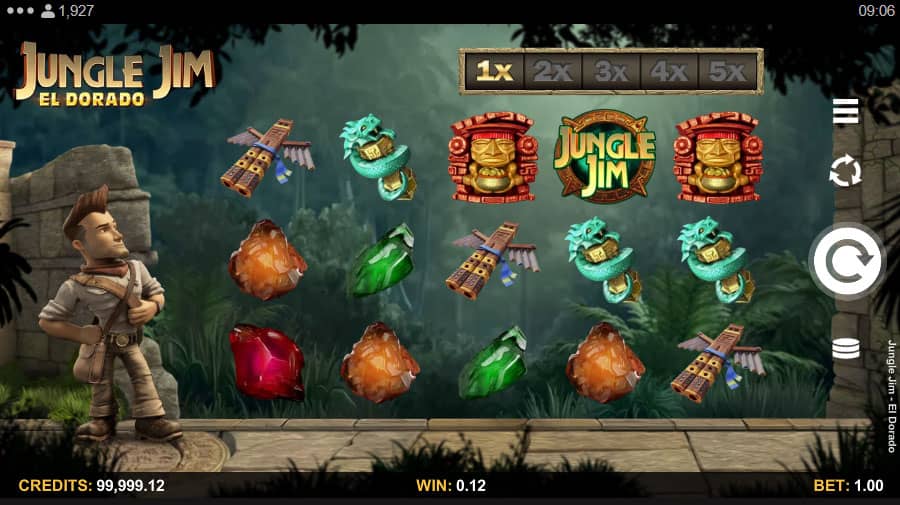 Powered by Microgaming, Jungle Jim Eldorado is set on a 3-row, 5-reel grid with 20 paylines. The reels of this slot are transparent, making the jungle background more conspicuous, with big bright symbols suspended across them.  Regarding graphics, Jungle Jim slot is probably one of the nicer El Dorado-themed slots and many players have claimed they get a fantastic vibe thanks to the excellent visuals and animations.

Check out the demo or play for real money, with betting ranging from as little as £0.25 all the way up to £25.

To spice it up, Microgaming added a Multiplier Trail. When playing the base game, the 1st win gets a x1 multiplier, but on each consecutive roll, the Multiplier Trail increases by +1 through to x2, x3, x4, and up to a maximum of x5. Players will be glad to know that this gets even better during Free Spins.

Free Spins are activated by Scatters. The Scatter symbol, styled in the likeness of an Aztec Calendar, can land on reels 1, 2, and 3 - when all 3 are in view, they award 10 Free Spins along with a 5x payout on top for good measure.

You can play Jungle Jim Eldorado for free or real money at PlayFrank Casino.

Gonzo’s Gold is one of the many offspring of Gonzo’s Quest, the legendary video slot machine game created by NetEnt. Gonzo’s Gold follows the adventures of bold explorer Gonzo as he continues to reap riches from the mythical city named El Dorado. 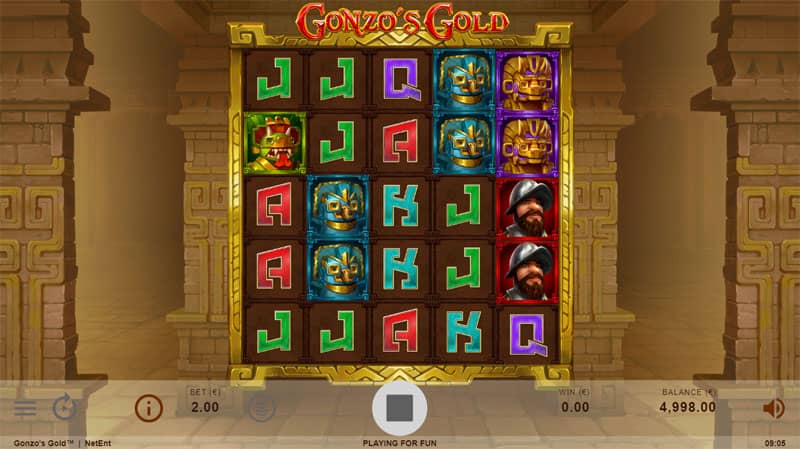 Powered by NetEnt, Gonzo’s Gold uses the cluster pays mechanism on a grid with 5 reels and 5 rows. Gonzo's Gold is a Cluster Pays slot which does not have a cascade/reaction mechanic. The climax is reached thanks to a symbol expansion feature which appears during Free Spins.

Free Spins: Gameplay starts to become more interesting when players land clusters of 20 matching symbols or more, maxing out at 750x to 5,000x the stake for a full grid of 25 premium symbols. Oddly enough, Gonzo's Gold does not have any wild symbols or cascading pay systems.

Players who get 3, 4, or 5 scatters will activate 10 Free Spins Rounds together with 2x, 20x, and 200x multipliers on your initial bet respectively.

Expanding Symbol Feature: After triggering a Free Spins round, Gonzo’s Gold displays a prompt which allows players to select a random ‘?’ feature – this symbol will later transform into an Expanding Symbol. When players get two adjacent expanding symbols, the symbol will expand to cover an entire reel or row, and a cluster payout is handed out for the newly formed cluster.

You can play Gonzo’s Gold for free or real money at PlayFrank Casino.

Jungle Jim and The Lost Sphinx

After the great success of Jungle Jim El Dorado, Microgaming launched another slot in the series: Jungle Jim and The Lost Sphinx. This time, Jungle Jim heads to Egypt to look for hidden and buried treasures there. 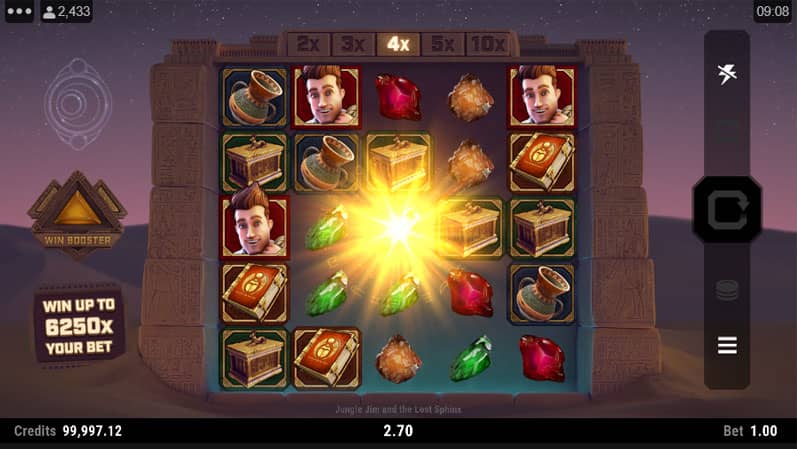 About Jungle Jim and The Lost Sphinx

Powered by Microgaming, Jungle Jim and The Lost Sphinx slot uses a default set-up of 5 reels, 4 rows, and 35 paylines, which can extend to 5 rows and 50 paylines during gameplay. Check out the demo or play for real money, with bets ranging from as little as £0.10 all the way up to £80.

Jungle Jim and The Lost Sphinx slot follows in its predecessors’ footsteps and employs the amazing Rolling Reels format, just as we mentioned above in the Jungle Jim Eldorado review. This means players get more chances of landing consecutive wins across a grid of 5 reels and 50 paylines. There are 8 symbols in the game: precious gems are low-value symbols while the book, urn, and sarcophagus are the higher-paying symbols. The slot’s main icon is the Wild, which substitutes all the other symbols except for the Scatter and Sphinx symbol.

Players who get three or more ancient relic Scatter symbols will trigger the Free Spins round. Players can get a win boost of up to 20x their stake as well as 12 Free Spins.

The Multiplier Trail gives players the chance to get up to 20x their stake, while getting the Sphinx symbol can cause an epic tumble which upgrades the Multiplier Trial by 1x and also gives out an extra Free Spin.

The Win Booster Feature is an optional feature that can be selected in the main game at any time and unlocks an additional Scatter to boost your chances of triggering the Free Spins round.

You can play Jungle Jim and the Lost Sphinx for free or real money at PlayFrank Casino.

Gonzo’s Quest Megaways is another classic slot which got a sequel that runs on the Megaways Engine. The very first Gonzo's Quest was released by NetEnt in 2011 and instantly obtained a “cult status”. Still today it remains one of the most played slots in the industry.

After NetEnt purchased Red Tiger in a deal worth hundreds of millions, it did not take long for the iGaming world to predict what mashups might be created following the amalgamation. NetEnt’s illustrious back-catalogue combined with Red Tiger’s Megaways licence quickly sprang to mind. And in fact, Gonzo’s Quest Megaways was born soon after. 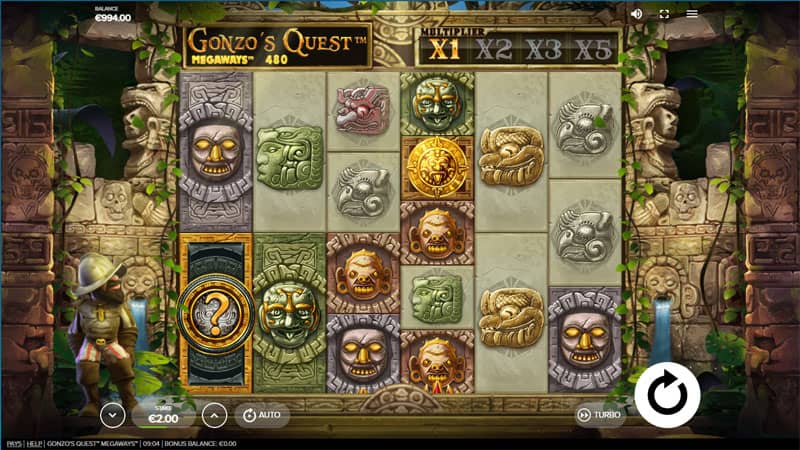 The Megaways mechanism is on a grid with 6 reels, each of which can display between two and seven symbols. Winning combinations vary on each spin, from 64 all the way up to 117,649. Since Megaways slots usually use some sort of Cascade Mechanism, Gonzo Megaways’ inherent Avalanche feature fits in perfectly. Add some pleasant jungle sounds, and the playful antics of Gonzo himself by the reels, and players can’t help but smile at the prospect of firing the game up.

Check out the demo or play for real money, with bets ranging from as little as £0.10 all the way up to £40.

Those who enjoy slots with various features will be pleased to know that there are quite a few in Gonzo’s Quest Megaways. Most of the time they land during the base game, keeping the game play nicely in balance with a climax resulting in a round of Free Spins.

When the Free Spins round ends, the last Avalanche Multiplier is carried over and applied to the base game sequence that triggered the feature.

Gonzo's Quest Megaways is a high variance slot with an RTP of 96%. The maximum win on Gonzo’s Quest is an impressive 21,000x the wager!

You can play Gonzo’s Quest Megaways for free or real money at PlayFrank Casino.

As highlighted in the above sections, you’re spoilt for choice when it comes to picking your favourite jungle-themed Amazon slots. With so many different styles, bonuses and other features available, you’re sure to find something that suits your preferences.

If you enjoy playing Amazon-themed slots we suggest you check out the following: