Here’s how you can be a part of your favourite TV game show!

Did you know that you don’t even have to visit the television studio to participate in your favourite Live Game shows? Thanks to Evolution Gaming, many games like Monopoly Live and Deal or No Deal Live are at your fingertips (quite literally) so that you can play them any time you want – and from anywhere in the world! All you need is an internet connection and a laptop or mobile device and the game show host will come knocking at your doorstep to entertain you.

Here are some of the best-loved TV game show-based Live Casino games that you can play right now, here at PlayFrank!

Launched in June 2019, this electrifying Live Gameshow is an extension of Evolution Gaming’s hugely popular ‘Lighting’ series. Like all other Lightning casino games, this one too is a simple guessing game with a mass appeal. The Lightning Dice game uses a hi-tech live studio and UI to give you a completely immersive and real-life game show feel. However, what makes this dice game stand out in the crowd is its massive random multipliers feature where you can win up to 1000x in a single bet. The Live Casino game also boasts the thrilling ‘Lightning Tower’, where all the intense action happens. The live game show host drops three standard dice into this transparent tower and immediately the camera close-ups and follow the dice as they tumble down the maze-like sections and finally come to rest at the tower’s base. The game is to guess the total of the three dice before they come to a stop. Also, you get extra points if your guessed total was struck by ‘lighting’ on the betting grid when the dice are still rolling down the tower. This new game offers an RTP of 96.21% and the top prize is £/€/$ 2,000,000. The minimum bet to get the dice rolling is a mere £/€/$ 0.20 while the maximum you can bet per dice roll is a massive £/€/$ 2,000. 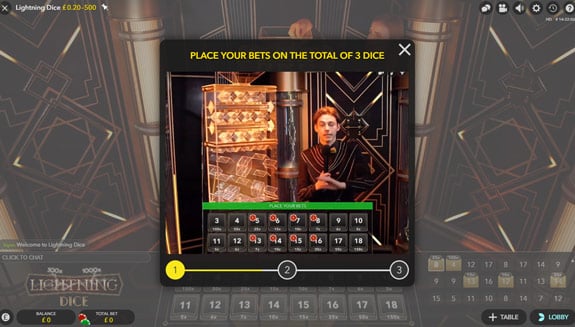 Trust us, there is nothing ordinary about this round of Live Roulette. Lightning Roulette is another marvellous piece of Live Casino gaming experience from Evolution Gaming that was even recognised at the Global Gaming Awards, G2E Las Vegas (2018) and was awarded the Game of the Year title at the EGR is an extraordinary casino game. The game features a game-show-styled studio with stunning lighting effects and sounds. Not only is the game visually impressive, but it is also highly rewarding with Lucky Number wins to every game round. No doubt it is a spin-off of the original Live Roulette and you’ll find all the regular components of the game — the live wheel, the live dealer, the full line-up of Roulette bets and every other thing involved in a standard European Live Roulette game. However, there is a ‘lightning’ twist. In each game round, Lucky Numbers (between one and five) are struck by lightning and given multiplied payouts of between 50x and 500x. This higher chances of winning make this new Roulette online version much more exciting. Each Lucky Number pays between 50x and 500x if you had made a Straight Up bet*.

Non-multiplied Straight Bets pay 30x. All other bets such as splits, corners, red/black and dozens pay the same as standard Roulette.

Bored of the local dice games? How about an ancient oriental game of Super Sic Bo? Evolution Gaming recently gave this age-old Chinese game a super cool Live Casino avatar and giving the online players a chance to win up to 1000x their bet. However the basic rules, even in the Live version, stays the same. That is, you have to guess the outcome of a three dice roll. What makes Sic Bo stand out in comparison to other dice games is that in this game there are all sorts of numbers, premonition and combinations to choose from. The software provider has added extra layers of thrill by introducing Random Multipliers. The game offers an RTP of 96.58% and the minimum bet starts from £/€/$ 0.10 per roll going up to a towering £/€/$ 5,000. If you hit the jackpot, you land the astronomical prize money of £/€/$ 5,000,000. 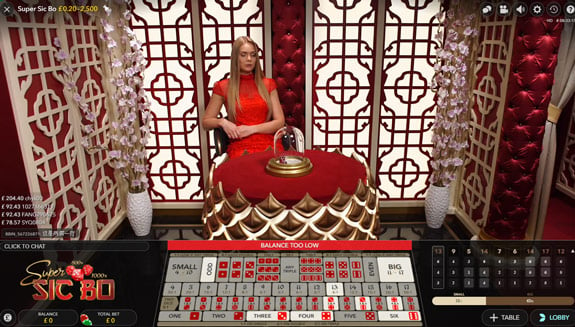 Released on 11th April 2019, Monopoly Live is a special edition of the Dream Catcher live casino game. The live casino game is based on (you guessed it right) world’s most-loved board game by the same name. However, unlike the two-dimensional board, this new game is highly immersive and takes you to a virtual 3D world hosted by none other than Mr Monopoly himself. Since it is a cross between Monopoly and the original Dream Catcher game, it also features the trademark Money Wheel which is divided into 54 equal segments separated by pins, out of which 48 are marked with a number starting from 1 and going up to 48. The other six segments include two ‘Chance’ segments, three ‘2 Rolls’ segments and one ‘4 Rolls’ segment. When Mr Monopoly, spins the super-sized wheel and you (the players) have to predict the segment the wheel it is going to stop at after the spin. When the wheel stops spinning, if it stops at a numbered segment you had placed your bet on, you win. Simple! Taking a cue from the old game, the live casino also offers ‘chance’ cards for cash prizes or multiplier bonuses. The Monopoly Live board game is available in three variants: British, German and Italian. The lowest bet is £/€/$ 1 and you can raise it up to £/€/$ 5,000. The game has an RTP 96.23% and offers a maximum payout of £/€/$ 500,000.

Deal or No Deal Live

Evolution Gaming, in partnership with Endemol Shine, has brought one of the greatest TV show games right to your living room. So, if you think your guessing game is strong, get ready to make a Deal or No Deal. Just like the old TV show, this game too has several rounds with the host trying to make a deal. However, the new Live Casino game uses an RNG-based qualifier round at the beginning. The second round is for the top prize where the game presenter asks players the defining question of the game: “Deal or No Deal?” Also, unlike the TV-version, the online casino game version comes with an extra layer of excitement: the unique prize multipliers. This makes the live game even more interesting. The live casino game offers an RTP of 95.42% where you can win up to £/€/$ 500,000. The minimum bet is a mere £/€/$ 0.10 per spin, while the maximum stakes can go up to £/€/$ 100. 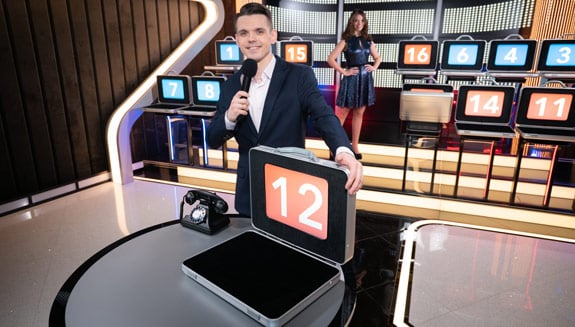 Ready to participate in one of these game shows and win real cash rewards? All you have to do is register at PlayFrank Online Casino. Once a member, you’ll be able to enjoy all these five games for real money wins. If you get bored we have over 2,500 other casino games for you to try your luck on.