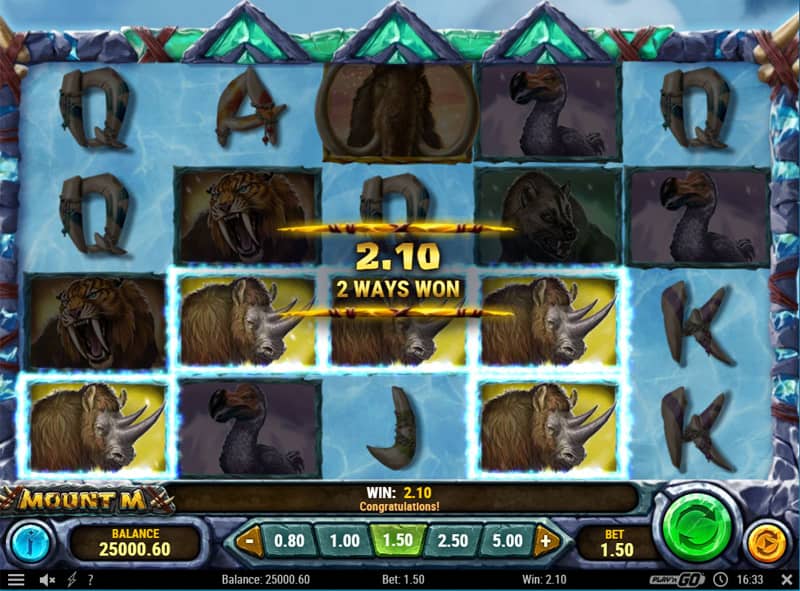 Swedish developer Play’n GO takes players back to the ice-age with their latest creation: Mount M slot. The slot intro displays Mount M as a snow-topped mountain with a frozen mammoth at its peak. The game is filled with prehistoric animals including dodos, woolly rhinos, sabretooth tigers while the mammoth is the top-paying symbol.

Although Mount M's slot features are mainly governed by the expanding reels, the game starts off on a 5-reel, 4-row grid with 1,024 ways to win. When maxed out, the centre 3 reels can increase up to 8 rows high, activating the 8,192 ways to win. Mount M slot can be played on any device: tablet, mobile or desktop, and any operating system: Windows, iOS, etc. 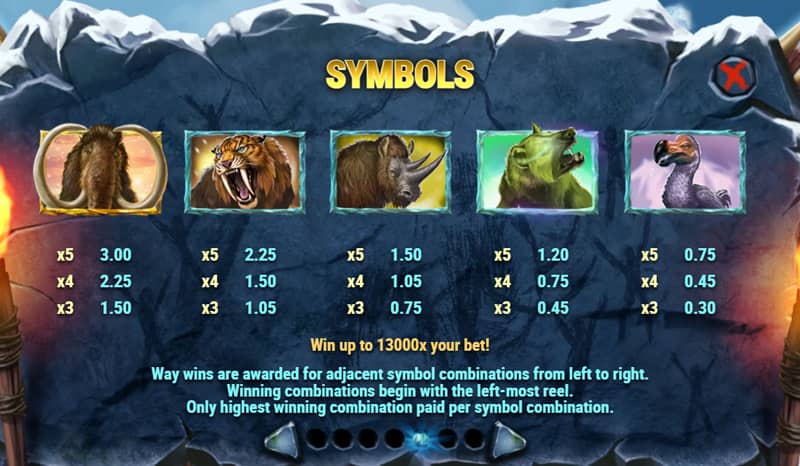 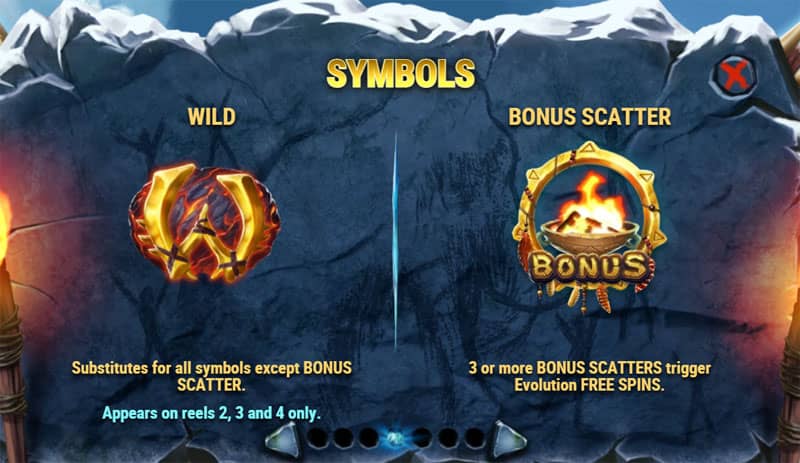 Players land a win when at least three matching symbols land from left to right - from the leftmost side. Players who land a five-of-a-kind win get 0.3x for the card symbols, or 0.5-2x the bet for five premium symbol wins. A golden wild symbol which substitutes for any of the normal pay symbols can appear on the middle three reels. 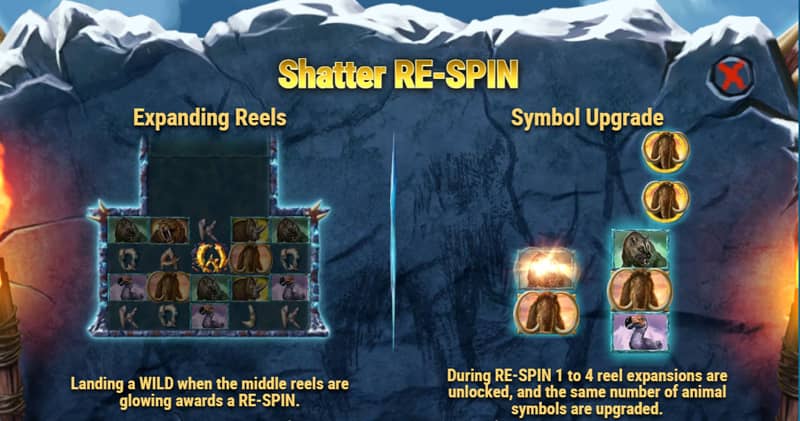 During Mount M Slot’s base game, an outline can at times appear around the three reels in the centre. If, while the reels are highlighted like this, a Wild Symbol appears then a Shatter Respin is gained. During Respins, the grid can add 1, 2, 3, or 4 rows over the middle three reels – making for 8,192 ways to win. For each new 3-symbol row added, a high value animal symbol transforms into the mammoth symbol. If all 4 rows are added to the grid, only mammoth and low pays will appear. When the Respin has finished, the grid resets back prior to the next spin.

If 3, 4, or 5 scatter symbols land anywhere on the Mount M Slot board, players are awarded 10, 15, or 20 Evolution Free Spins, respectively. While the bonus round is active, landing 2, 3, 4, or 5 Scatter Symbols retriggers an extra 3, 5, 8, or 10 additional Free Spins. The bonus round starts with the grid at its default 5x4, 1,024 ways size. Although the four extra rows are visible, at first, they are locked. The aim here is to grab orb overlays from Wilds. Each time a certain number of orbs are collected, an extra row is unlocked, and the lowest premium symbol is transformed into the top paying mammoth. The first, second, third, and fourth rows are unlocked when 5, 10, 14, and 17 orbs have been collected. Also, whenever the reels are expanded, +1 free spin is awarded. Expanded reels do not reset between free spins.

Whether the ice age has been visualised accurately by Play’n Go’ visual theme is up to you to decide. What we know is that although the main features are reminiscent of 24K Dragon Slot, Mount M managed to be different enough to escape the “just a reskin” criticism.

The Shatter Respin feature is a refreshing break from the main grid game, and it occurs on a regular basis.

The bonus round is quite different from 24K Dragon, although it can be less exciting when players do not advance very far on the “grid expanding” and “symbol upgrade” journey.

Collecting orbs is not always easy, but the feature can be quite thrilling if you close in on the maxed-out grid where only mammoths and royal symbols appear. The 13,000x potential is solid enough, but almost half of what 24K Dragon offers.

What is the RTP of Mount M Slot by Play’n GO?

What is the volatility of Mount M Slot by Play’n GO?

Mount M by Play’n GO is a high-volatility Slot.

What is the maximum win on Mount M Slot by Play’n GO?

Does Mount M Slot by Play’n GO have Free Spins?

Does Mount M Slot by Play’n GO have other bonuses apart from Free Spins?

Where can I play Mount M Slot by Play’n GO for free or real money?

You can play Mount M Slot by Play’n GO for free or real money at PlayFrank Casino.

If you enjoyed reading this article, then you should check out the following reviews as well: